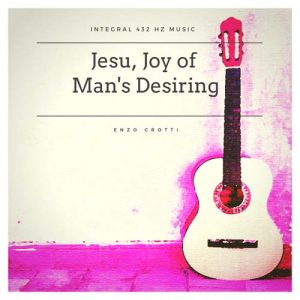 The Integral 432 Hz Music considers all the tonics to be important, not just the note A at 432 Hz. For this version of the known Chorale BWV 140 by J.S. Bach, I chose the unusual tonality of F # at 360 Hz, which we can approach the Seventh Chakra. Of course all the frequencies of a song are important, that is why it is not enough to generate 432 Hz tune to have effective music, for example in the tone of F # the frequencies of C # at 540 Hz and B at 480 Hz will also be important. they have been obtained through tuning in fifths derived from the Pythagorean scale that I use for my compositions at present, so as to obtain frequencies that are in harmony with the Earth and the seventh Chakra.

This track is the n. 12 of the CD “Integral 432 Hz Music“, already completed, which is about to be published.

All that exists is vibration, including us. Music in tune with the basic frequencies of life resonates in us and gives us positive energy, in particular by stimulating emotional states and brainwaves. This version of Bach’s well-known composition is based on a harmony that enhances the frequencies of the F # at 360 Hz, connected to the seventh chakra and to many important frequencies of the Earth. The song was recorded so that the vibrations and main characteristics of the music are tuned to the beneficial frequencies of Integral 432 Hz Music using the Pythagorean scale in fifth.