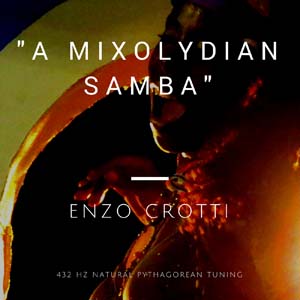 “A Mixolydian Samba” is a composition that is part of a small suite of three songs focused on deep listening. This kind of compositions will characterize next CD of Enzo Crotti, which of course will consist of 432 Hz Integral Music. It is a research work that the guitarist and composer Enzo Crotti has pursued for several years and intends to find the connection between music, mathematics and awareness. For example, this piece is composed in mixolydian mode to A note, a scale that has characteristics of joy and happiness and that stimulates the second chakra. The rhythmic will to discover our roots, focusing on contact with Earth and the ancestral part of themselves. The music is composed and recorded so that the frequencies are as natural as possible, making a wise use of the mathematics of life. These skills are explained in the last book published by the author, entitled “432 Hz Integral Music“. The book will be translated into English soon.

“All that exists is vibration, including us. Music that accords with the basic frequencies of life resounds in us and gives us positive energy, in particular by fostering emotional states and brain waves. “A Mixolydian Samba” is a composition that has been recorded with an A note to 432 Hz, using a Natural Pythagorean scale. not only that, but every important element of music: time, musical scale and harmony, are based on the mathematics of life”. (Enzo Crotti)

The song “A Mixolydian Samba” is available in the Enzo Crotti official website and in the most important music store on the Internet.