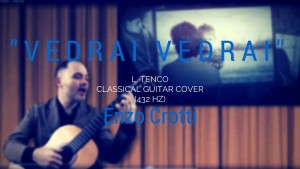 “Vedrai Vedrai“, it is a song immortal, ever present as now. The thought of a better tomorrow is what away from happiness, but that is here and now. In this sense, the words from Tenco can also be read as a provocation to seek change from now and not relegate it to a better future. That’s one of the ways of reallizzazione staff, and that’s one of the implicit messages that Enzo Crotti takes place in his shows about music and awareness. The video is now available on major video sharing platforms on the internet. Good listening to this version of “Vedrai Vedrai”, L. Tenco cover with classical guitar.