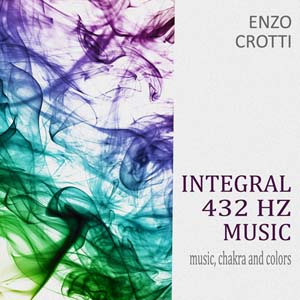 Making this Album required attention so that every detail was based on the mathematics of life. The tones and modes of the music are based on special intonations derived from the frequencies indicated by Pythagoras for musical notes, thus obtaining the fundamental frequencies of Integral 432 Hz Music. In this type of music are important 8 hz, fundamental value in the Universe of Macrocosm and Microcosm, 432 Hz and 256 Hz and other volumes shown alongside the songs, also linked to the movement and the size of the planets, first of all the Earth. In this way, states of relaxation are promoted by the resonance that these vibrations transmit to the body of the listener. Also the speed of the tracks, and therefore their Tempo, have been chosen to interact positively with the frequencies. By combining color tonics you can also suggest one or more chakras that are stimulated by listening to a certain piece. All these knowledge related to the mathematics of life are part of 432 Hz Integral Music.

Other Store were you can find “Integral 432 Hz Music”

Tracks contained in the album