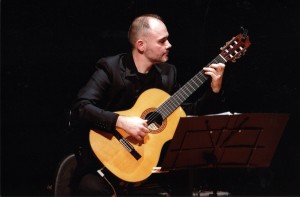 As a child I was interested in music, even though my parents were not musicians. I still learned to play some simple melodies to piano and I remember that I recorded classical music on the radio to listen to it again in the afternoons when not caught. So music has always accompanied me, even later, when I started playing in the youth band of rock’n’roll and then when I decided to deepen my knowledge with more serious musical studies. Before I took private lessons for a few years, then studied in private and state institutions, up to a degree in jazz music at the Conservatory of Parma, with a master’s degree. Later I also obtained a diploma in classical guitar, in order to complete my training at 360 degrees. I played a lot for pleasure and for passion, in numerous concerts with various formations and genres, from rock to jazz to classical, but I always had a creative streak and so I came to make my original music. In the meantime I started a few years to write and treat certain blogs, including in particular I am interested in the theme of awareness with music and art as a balance between beauty and usefulness. I always thought in fact that music is not just a pastime, but something much deeper, touching the soul of man and caresses our in an intimate nature. After years of research I am now proposing integral music to 432 Hz, in which all elements of the composition are calibrated to be in tune with nature and the mathematics of life.