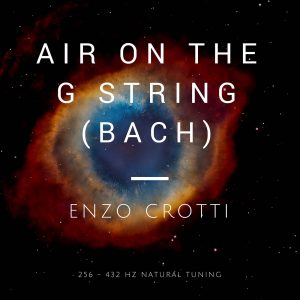 The famous “Air on the G String” by Bach, has been arranged and recorded by Enzo Crotti intoning the musical frequencies on the Pythagorean scale to 432 Hz.

Continues the work of guitarist and composer Enzo Crotti on the beneficial musical frequencies. This time the song “Air on the G String” was arranged and recorded so that the main musical elements, that is Tempo and musical frequencies, have been calibrated on the mathematics of the Pythagorean scale. The key of C major is the fourth chakra and the green color, so the frequency of this music will forge a relaxing and beneficial effect on what is the emotional part of the listener.

“All that exists is vibration, including us. Music that accords with the basic frequencies of life resounds in us and gives us positive energy, in particular by fostering emotional states and brain waves. “Air on the G String” is a composition by Bach which was granted with a C note at 256 Hz and A note at 432 Hz, using a Natural Pythagorean scale. Not only that, but every important element of music: Tempo, scale and harmony, are based on the mathematics of life.” (Enzo Crotti)

The song “Air on the G String” is available in the Enzo Crotti official website and in the most important music store on the Internet.