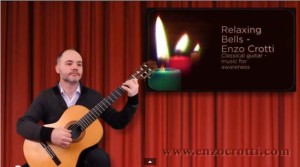 Just came out “Relaxing Bell”, my new music video music for awareness, available on You Tube and on the major platforms of video streaming.

It is now available the video of the song “Relaxing Bell”, from the album “Fai questo e torna da me”, released September 1, 2014, a project album of music for awareness and meditation which contains eight original songs and a story which also aired by Radio Rai Tre last year. The song “Relaxing Bell” is played with the classical guitar that accompanies a Tibetan bell, where melody and harmony are designed to be very relaxing, from an Indian scale. The work is inspired by the Nada Yoga and esoteric knowledge, trying to lead the listener on a journey of awareness.