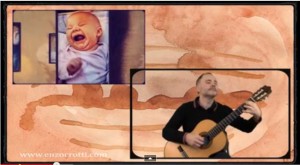 “A Short Dialogue” is new music video by Enzo Crotti on classical guitar, which is available on YouTube and on major platforms of streaming video.

The song “A Short Dialogue” is on the album “Some Musical Little Things” which was released September 1, 2014. It is a CD that contains original music for classical guitar tuned to 432 Hz, with themes and improvisation composed and played by the maestro Enzo Crotti . This is the sixth video released from the album, we can hear the notes of “A Short Dialogue”, a theme that contains two entries, so remembering the dialogue between two people. The images that accompany the author during execution, are in fact references to the dialogue, listening and speech, trying to reach a final agreement, which is also the melody to be obtained. The choice of tuning to 432 Hz for the LA on the classical guitar, is dictated by a design research more in tune with nature.