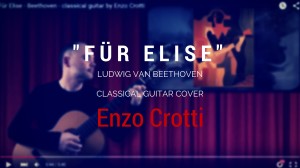 The popular music of Beethoven is repurposed by guitarist Enzo Crotti in an unusual version with a nice Spanish sound. Despite the title “Für Elise”, in fact it is not clear who was dedicated the composition of Beethoven, but certainly it is one of the romantic songs par excellence. Classical guitar, closer to flamenco, brings this famous melody to a greater passion. The song was released to mp3 and a video available on You Tube, to listen for all lovers of classical guitar and not. From the site of the author Enzo Crotti is buying even the score, as well as the mp3 version of “Für Elise” arranged for classical guitar.